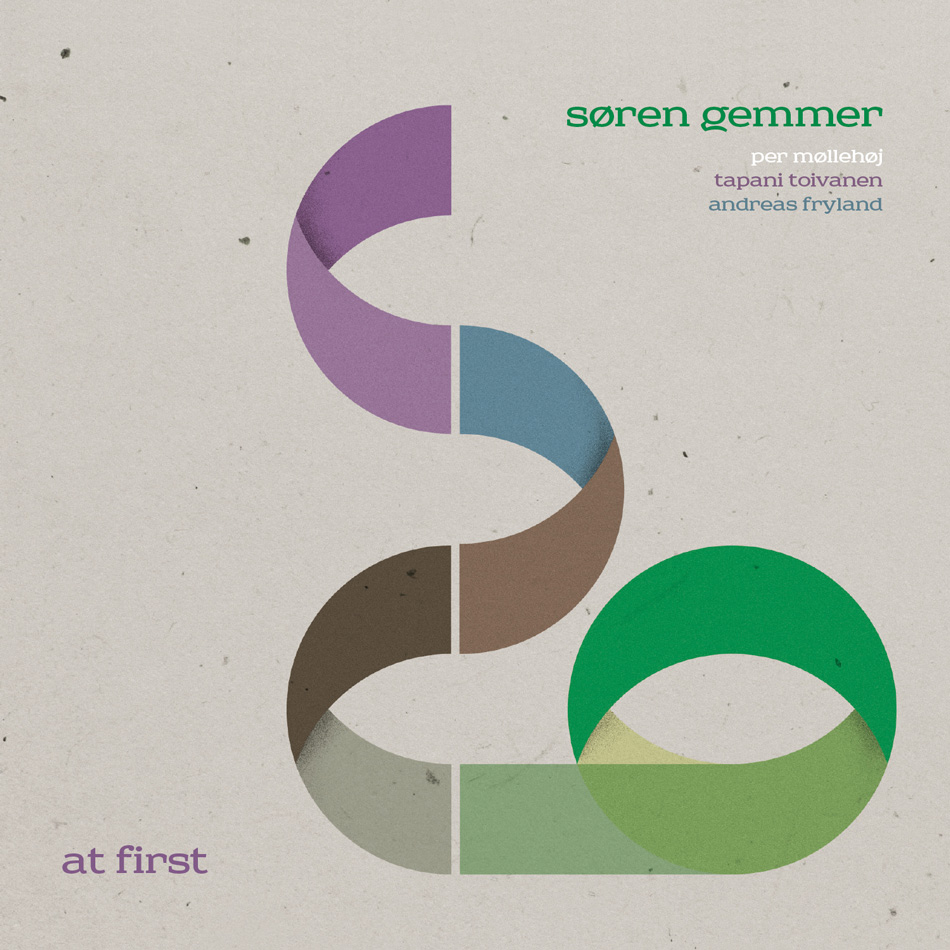 [ |at fǝ:st| at the beginning, in the initial stage or stages: ]

On August 25-26th of 2012 the 'Gemmer-Toivanen-Fryland-Møllehøj' quartet recorded ten original composition near Osnabrück, Germany. The recordings will be released on CD and digitally - iTunes and spotify - as the group leader/main composer debut of Søren Gemmer on February 18th of 2013 on the highly acclaimed label for adventurous music, 'ILK'.

Buy on CD
Buy on iTunes
Listen on Spotify

The album features original material, ten songs rich in ideas and ingenuity. The majority of the eight pieces composed by the group leader expresses the intention of merging the love and awe of late-romantic and modern classical music of such composers as Prokofiev and Shostakovich with the sound and formal concepts of modern jazz. A musical field where the love of clear-cut, yet at times highly chromatic melodies and ambiguous harmony sets the scene and mood for expressive improvised efforts, collective as well as individual, so central to the modern jazz idiom.
The inclusion of compositions from Per Møllehøj and Andreas Fryland, respectively, is a testament to the fact, that 'at first' is indeed a group effort. The evocative, highly song-like guitar feature 'Mellemrummet' and the cryptic beauty of 'Dear W.' sit very well with the works of Søren Gemmer.

at the hands of

The quartet went out of their way to record this music as best possible, namely at Fattoria Musica, Osnabrück, at the hands of legendary Dutch sound engineer, Chris Weeda. The optimal conditions and the isolated location of Fattoria Musica made for spirited playing, heated arguments as well as a sense of things coming together. The music was mixed by Chris Weeda and mastered by Darius van Helfteren an has obtained a sonic clarity and finesse on a very, very high level.

"Masterful from start to finish, at first is an album that grows in strength with repeated listens and marks the arrival of a new talent."

“5/6 - Outstanding debut … (that) from an artistic viewpoint has the potential for an international breakthrough.”

"This is apparently a debut album, which I find hard to believe. It sounds more like a mature work from a composer clear about his direction and having moved a few stations down the line already."

"Gemmer is particularly dedicated to sound: he cares about it during his keyboard blasts, like in the two-faced “Chords”, first wrapped into stillness and then storming under Fryland’s well delivered drum hits; or in the more contemporary approach of “Russians”, whose lopsided paths deploy themselves and harmonize on Møllehøj’s guitar strings, blending pentatonic lines with clean and dry phrases.

An equally frank and pondered work, which turns on the spotlights on Gemmer and his excellent collaborators.

"This is quite a sublime album..."

"I must say, I’m pretty surprised that a talent of this size is sneaking around at the edge of the Danish jazz scene. I hope we get to hear a lot more from this man and he may very well use the same musicians. Møllehøj is exceptionally impressive and Fryland once again he shows that he is something very special."

"The harmonics and subtle colour that Søren Gemmer adds to each piece is wonderful to hear. at first is an invigorating debut that is easy to fall in love with quickly. A lush and moving work for any music fan. Start listening now..."

"So, what are the songs? Hopelessly romantic or complex and sophisticated? at first shows that these two properties are not mutually exclusive and in this case are in perfect harmony. In addition to the picturesque harmonies, the band also establishes a varied character by well-executed improvisational passages on this quite successful debut album."

"This Danish pianist's debut album is a big surprise - the young man makes the impression of already being an accomplished and mature artist. Superbly composed themes by the band leader - both melodically attractive and spacious enough to constitute a starting point for improvisation. If we add to this the clear and warm sound on the recording - it turns out, that we are dealing with one of the most promising debuts of recent years."

"...everything is impeccably balanced and elaborated."